It’s a crazy time of year for us reinsurance brokers. The days just before 1/1 feature little ‘work’ in terms of hours spent making stuff like submissions, analyses, meeting schedules, etc. They do feature, however, a load of stress as the negotiations for deals incepting at 1/1 reach their fever pitch.

Anyway, in my spare moments this week I’ve sought refuge from the casualty market and swapped my actuary hat for my catastrophe analyst hat.

I have an ongoing fascination with inflation rates. I’m not entirely sure what they are, but wow do they sure exist. Have a look a these figures (swiped from Swiss Re’s sigma reports) on catastrophes deflated to their original nominal values by the CPI, which Swiss Re uses to trend their losses to present day dollars. I’m going to argue this is a stupid idea.

There are two trend lines below. 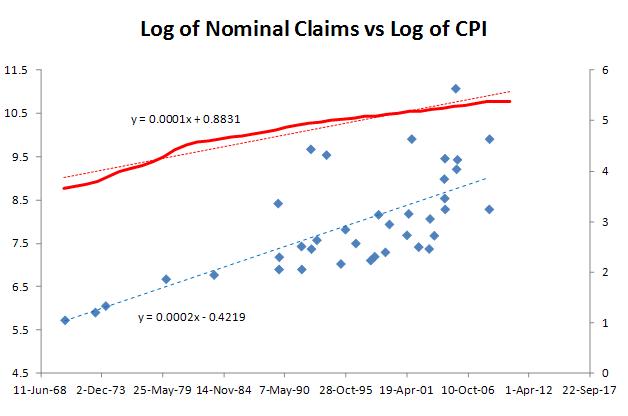 One, the red, is a linear fit of the ln of the CPI level. (Always use the log of a growth rate to pull out the compounding effect*)

The other line is my nominal catastrophe cost data. Notice that the slope is about double that of the CPI. Obviously some of that is due to the fact that there are WAY more outliers.

Remove those (arbitrarily), though, and some effect remains.

The CPI is a funny thing – a strange mixed bag of goods and services. Occasionally I dig into the CPI and one day I hope to to see if I can figure out what a good basket that predicts these cat cost levels might be.

I’m missing Non-US data, of which there is some in the source files I used. I kicked what was there out because they’re presented in USD each year (at that year’s FX rate) and inflated using the US CPI. Blagh. PPP is weak weak weak and even in theory only applies to general monetary inflation, which is completely different to building cost inflation plus the hundred other possible non-monetary sources of claims inflation for catastrophes+.

Ok, the next bit of analaysis, which is what I really wanted to do. Here’s the question: how good are the estimates of the total cost of these disasters at year-end following the loss? Here’s the answer: pretty good.

Each year, Swiss Re report the Industry loss size and, amazingly, the nominal values rarely fluctuate.

There are two notable exceptions. First is Katrina, which jumps big-time, from 45bn to 65bn. The reason for this is that Swiss started including flood losses in this total only a year later. The second exception is Wilma, which was notorious at the time for being an under-reserved loss. We were down to the ‘W’ in the hurricane alphabet and some suspect that insurers were being willfully blind to preserve capital/face so they could better handle Katrina.

These estiamtes are used heavily in a market for products called ILWs (Industry Loss Warranties). These work like this: pick a level (say 20bn US Wind) and collect if the industry payout exceeds that amount. Lower attachments (10b, 5b, etc) means higher probability of loss and so a higher price.

What’s more is that there’s a market for covers called ‘dead cats’, which supply coverage for a catastrophe after it happens. For example, when Hurricane Katrina hit, the loss first loss estimates were something like 20bn (this being a week after the loss). A prudent insurance company might look at that loss and say, wow, I think it’s going to be much higher than that. They then go to the market and buy cover agains the deterioration of the loss estimates of a catastrophe that’s already happened (a ‘dead catastrophe’ or dead cat).

This analysis suggests dead cats are a great write. A year out, anyway.

* A few weeks ago, my mom said the following to me (paraphrased): “I remember so little about high school math. I learned what I needed to to get through it and into a good University, but who really cares? Like, does ANYBODY actually USE logarithms?”

+ For example, catastrophe models use one proxy called ‘demand surge’, which purports to measure the non-linear increase in costs for rebuilding things when the normal supply of local materials/labor is fully occupied. Economies can only be stretched so far. Remember people traveling from all over the country to New Orleans to build houses after Katrina? Well, the housing supplies market before all that supply showed up is what demand surge measures.

Not Unreasonable is a blog and podcast by David Wright, an actuary and reinsurance broker at Beach, a global reinsurance intermediary. Born and raised in Canada, David moved to the New York area in 2010 and lives in Northern New Jersey with his wife and three children.
Here is David’s Linkedin profile. Here’s a list of some great blog posts. Subscribe to the podcast in iTunes, stitcher, or by rss feed. Sign up for the newsletter here and also watch the youtube channel!
Loading Comments...
Comment
×
<span>%d</span> bloggers like this: