Have a look at the graph below. This shows the how our mind is different from math. 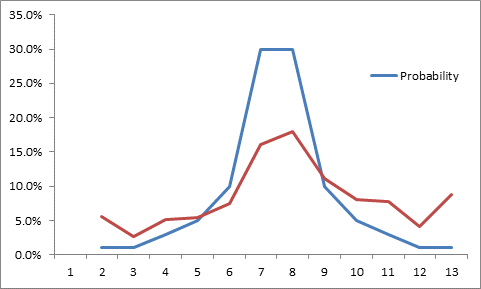 The blue line shows a bell curve with probabilities increasing for events near the average. The red line is how we interpret the likelihood of events given the same data.

Like math, people think the average outcomes are more likely (peak in the middle for both lines), but unlike math, people place a lot of weight on semi-remote probabilities.

To a human, then, all probabilities are approximately uniform (events are equally likely), at least compared to mathematical models. And see the spikes on the tails? That’s availability bias coming into play. The more time we spend thinking about something the more likely it will seem to be in our minds. Extreme events attract attention. So they must be more likely to occur, right?

If we look at a list of events and our guts tell us they’re all more or less equally likely to occur, black swans are just items left off the list. Draw attention to them by putting them on the list and, bang, they go from impossible to about as equally likely as all the other ones on the list.

The core lesson here is that humans are bad at small increments of proportionality. Something is either:

The secret is that ‘really likely’ and ‘not so likely’ are pretty much equally likely.

Not Unreasonable is a blog and podcast by David Wright, an actuary and reinsurance broker at Beach, a global reinsurance intermediary. Born and raised in Canada, David moved to the New York area in 2010 and lives in Northern New Jersey with his wife and three children.
Here is David’s Linkedin profile. Here’s a list of some great blog posts. Subscribe to the podcast in iTunes, stitcher, or by rss feed. Sign up for the newsletter here and also watch the youtube channel!
Loading Comments...
Comment
×
<span>%d</span> bloggers like this: