Decade by decade your overall reserves of energy drop a little. It’s not that you lose the ability to rise up and push-through. It’s that the hangover afterwards is worse, begins to accumulate, and lasts well into your next performance.

The research supports the notion that sheer determination alone is not a sustainable approach. When Roy Baumeister studied acts of choice he found that we have one reservoir of will and discipline, and it is depleted by any act of conscious self-regulation. For example, participants who were required to resist eating fresh baked chocolate cookies for 5 minutes before tackling an unsolvable puzzle gave up 60% sooner than those did not have to exercise willpower in advance.

That’s Garry Watanabe on the Role of Recovery in Performance. It’s a good piece that focuses on how great athletes have optimized recovery routines. An edge that has more to do with concentration (meditation, really) than muscles and bones. The idea of a mental edge is important.

For most people, aging is the experience of revising your expectations of your body downwards. But consider the 45-year-old Olympic athlete:

Doctors have confirmed what she instinctively knew: Production of hormones such as testosterone and growth hormone that are critical to building muscle and recovering from workouts are continuing to decrease. She can no longer expect to maintain the strength of her youth, let alone improve on it.

“That’s probably the biggest thing I’m [in trouble] on,” Torres said. “They took my levels, and they’re just low. I’m a middle-aged woman: They’re low. Unfortunately, there’s nothing I can do about it.”

…Even with the new approach, her body has complained and groaned every step of the way. She has had three knee surgeries as well as a pair of operations on an injured shoulder and hernia since the 2008 Summer Games.

“It seems like I’m sore every freaking day,” Torres said in between lifts. “You never get a day where you’re like, ‘My whole body just feels really good.’ ”

It’s amazing when older athletes can (without enhancement) succeed at the highest levels. I think about it in terms of this graph: 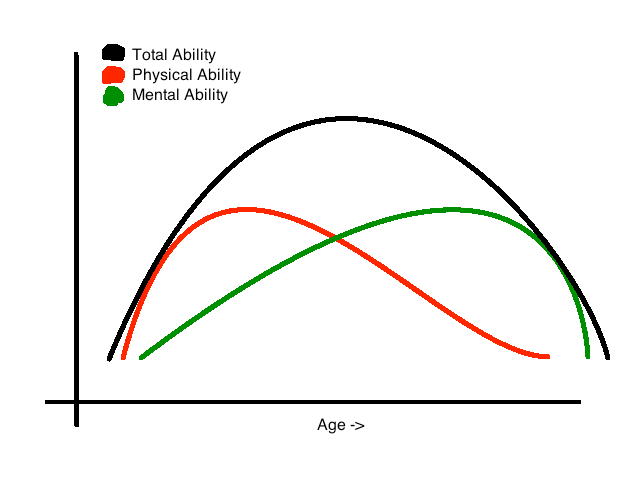 Ok, not the greatest graph, but the point that mental ability matters. The discipline for endless practice, dealing with the temptations of money and fame and the incredible pressure of competition crush the minds of the pretenders.

And this, far more than raw physical ability, is learned. Which means that there’s an element of persistence about the greatest champions that cannot be explained by their talent. This also lets them dodge physical decline.

What’s more, if you believe in progress and science and don’t mind a little wildly unfounded speculation, then an athlete’s mental peak is probably much later than it once was. There could be more Bernard Hopkinses and Dara Torreses in our future.