I posted this too soon. Here is a snapshot of the demographics of the USA in the last three episodes of monetary instability: 1929, 1975, 2009. 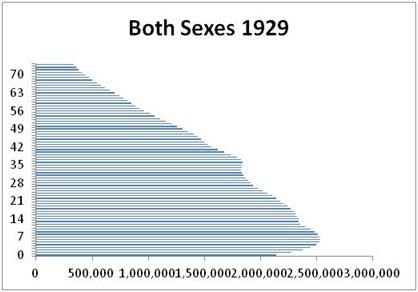 1975 looks far more like 1929 than either does like 2009. What is the explanation? That Milton Friedman’s lesson was taught in the interim? That the Gold Standard messed everything up? Not sure… Here’s Scott Sumner:

While campaigning for re-election in 1932, Herbert Hoover bragged that although the economy was looking a bit weak, voters could take comfort in the knowledge that his adroit leadership had preserved the dollar/gold peg.  Soon after, that old regime was swept away by a political and economic tsunami.

That rhetoric suggests the politicians weren’t as beholden to the median-aged voter as they supposedly are today.

My source data is here, here and here.